Pop! Vinyl Mega Clearance Event at Ryft!
Hundreds of Pop Vinyls at discounted prices, some no longer in production! New stock added every day!
2 February, 2022 by

We love at Pop! Vinyls here at Ryft, but with new stock arriving every day we need to make some space! And the best way to do that...???

With hundreds of Pop! Vinyls at discounted prices and new stock added daily, this is one event you WILL NOT want to miss.

Most of the Pop! Vinyls included in our Mega Clearance Event are no longer in production, making them a valuable collector's item!

Don't miss out! Shop the full discounted range here, or scroll down to  check out some of our favourites. Happy shopping! 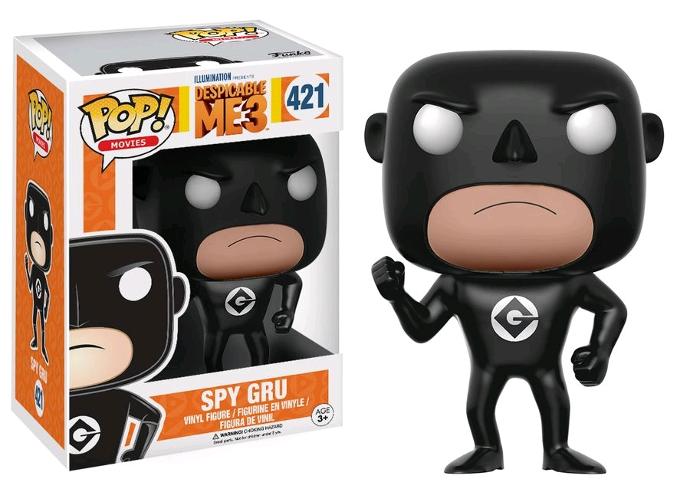 FUNKO POP! Despicable Me 3 #421 Spy Dru (Gru).
This is the standard version of the Spy Dru POP, which is black Spy Dru.
Spy Dru is from the POP Movies range.
Buy Me Now 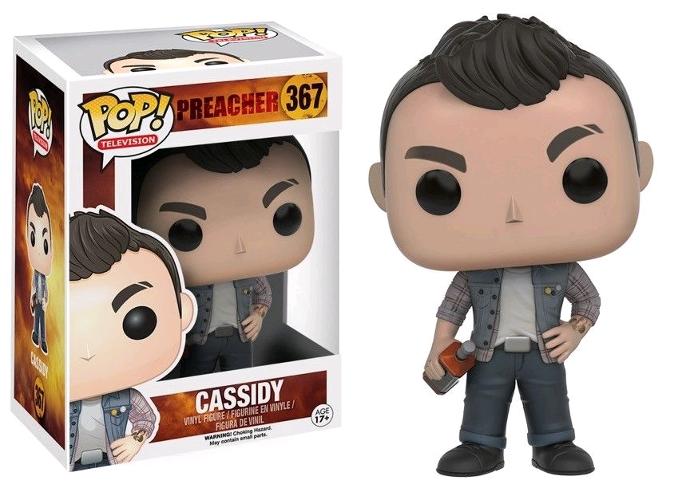 Cassidy (Preacher) Funko Pop! Vinyl Figure
So Garth Ennis and Steve Dillon's great Vertigo comic is now coming to our TV screens via AMC and Amazon Prime. As we offer these, the first episode just aired and it already looks all set to become a major cult sensation with it's dark, but often tender, and funny scripts and excellent lead actors including Dominic Cooper in the lead role. 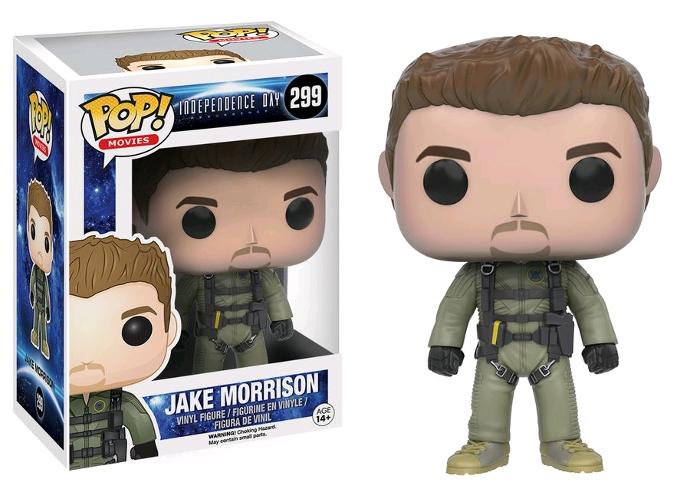 Independence Day: Resurgence takes place 20 years after the events of the first film. The United Nations has created the Earth Space Defence to keep them safe from further alien forces. However the aliens were able to send a distress signal of their own before their final defeat.
This Pop Vinyl features Jake Morrison, a U.S. pilot serving in the Earth Space Defence.
Released May 2016 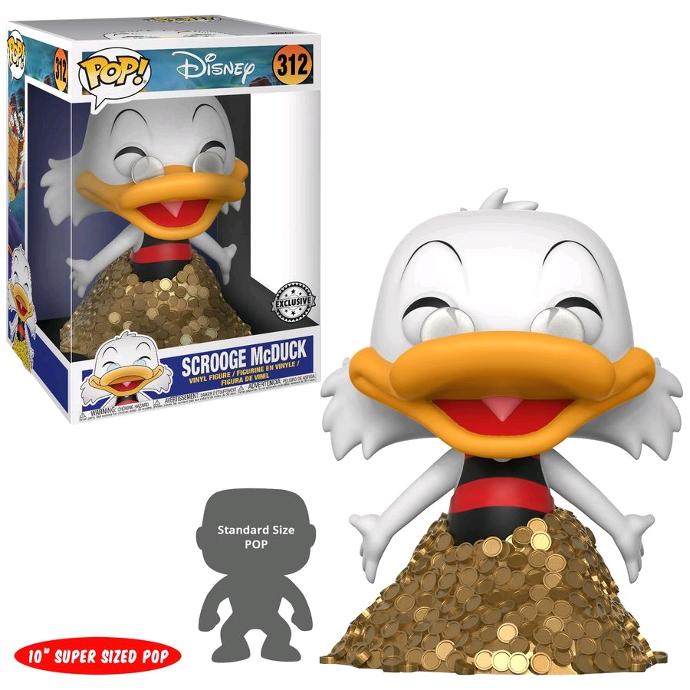 This 10" POP! features Scrooge McDuck himself, wearing his striped swimsuit as he swims through a giant sea of coins! An absolute must for any Disney fan.
Discounted Pop Vinyls! and clearance Pop Vinyls! are supplied as is, and no refunds will be accepted. They maybe shop soiled, in most cases they are as new. Any concerns please request a photo.
Buy Now Pop Vinyls in Australia @ ryft.com.au
Buy Me Now 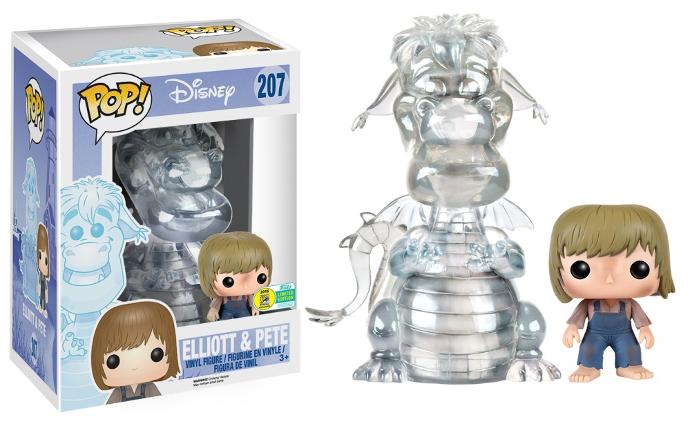 From Pete's Dragon, Invisible 6" Elliot and Pete as a stylized POP vinyl 2 pack from Funko!
This is a 2016 Summer Convention Exclusive! Stylized collectables stand 6 inches and 3 3/4 inches tall, perfect for any Pete's Dragon fan!
Check out the other 2016 Summer Convention Exclusives! Collect and display all Pete's Dragon Pop! Vinyl's!
Discounted Pop Vinyls! and clearance Pop Vinyls! are supplied as is, and no refunds will be accepted. They maybe shop soiled, in most cases they are as new. Any concerns please request a photo.
Buy your Pop Vinyls @ ryft.com.au 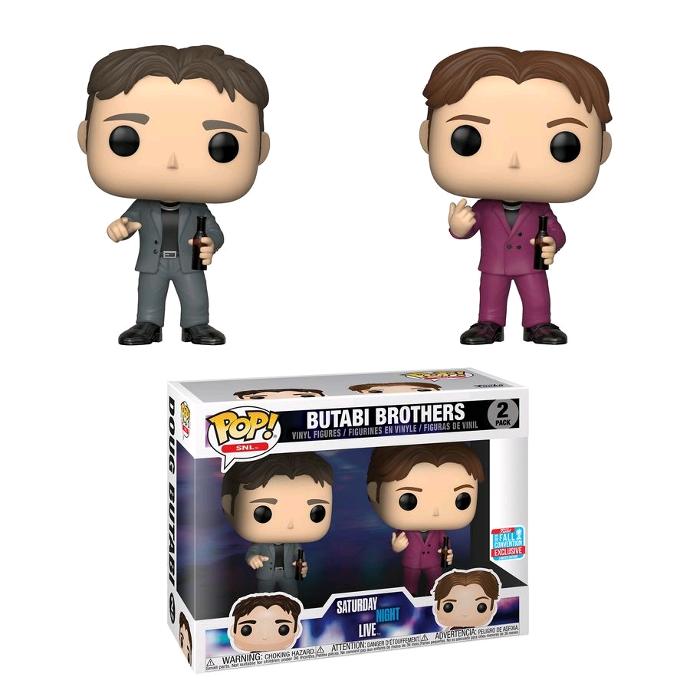 Since debuting in 1975, Saturday Night Live has become an television institution, launching the careers for some of comedy's biggest names.
This Pop! 2-Pack features Doug & Steve Butabi, known as “The Roxbury Boys”, portrayed by Chris Kattan and Will Ferrell.
Doug and Steve were habitual clubbers dressed in rayon suits, as they attempt to pick up women on their outings. Their trademark was bobbing their heads in unison to the song "What Is Love" by Haddaway, which always played throughout the duration of each sketch.
The skit was so popular that it spawned the film “A Night At The Roxbury” in 1998. 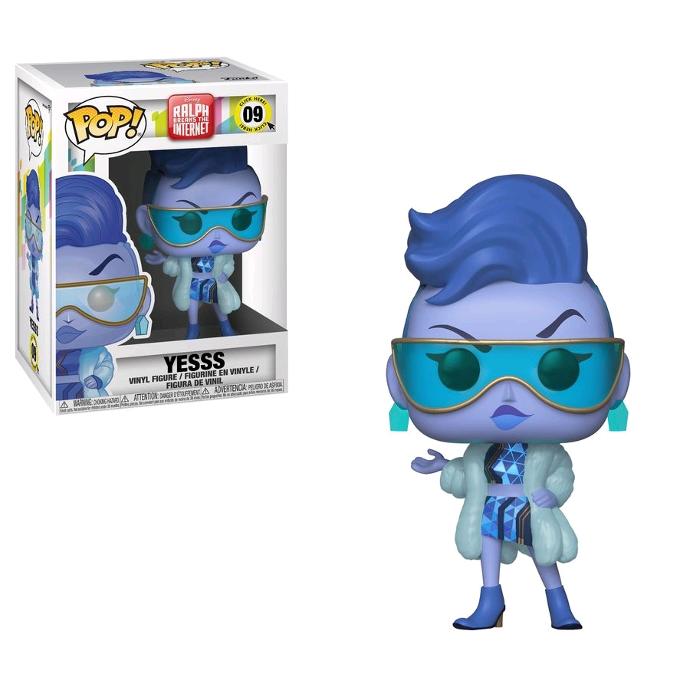 Six years after the events of the first film, the story centers on Wreck-It Ralph's adventures in the Internet data space when a Wi-Fi router gets plugged into the arcade by Mr. Litwak, as he must find a replacement for the broken steering wheel of Sugar Rush.
This Pop! features Yesss, an algorithm that determines the trending videos on BuzzTube. 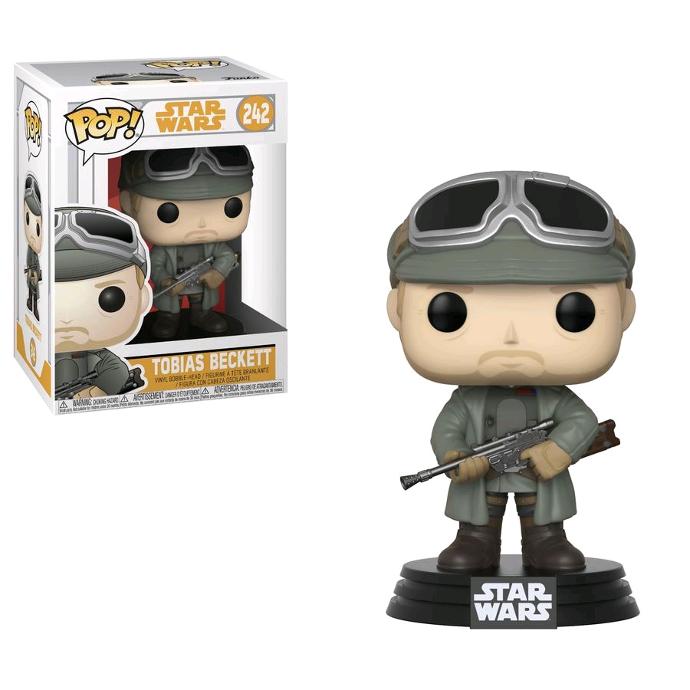 Star Wars: Solo is one of the most anticipated films of 2018, and now Funko fans can celebrate because a new wave of Solo Pop! Vinyl Figures are preapring to jump to hyperspace and join your Funko collection!
Described as a space western, 'Solo' is centered on a young Han Solo and his adventures with his Wookiee partner Chewbacca, including their encounter with Lando Calrissian.
This Pop! features Tobias Beckett, a criminal and Han's mentor.
A must for any true Star Wars collection! 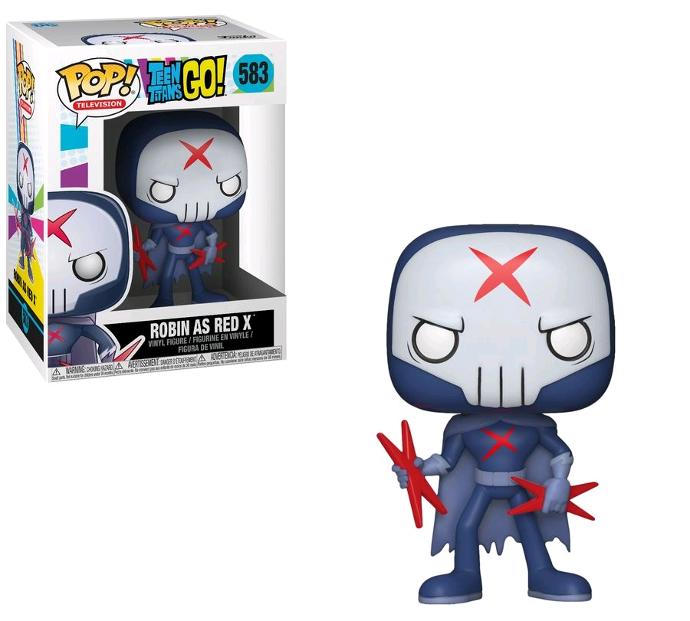 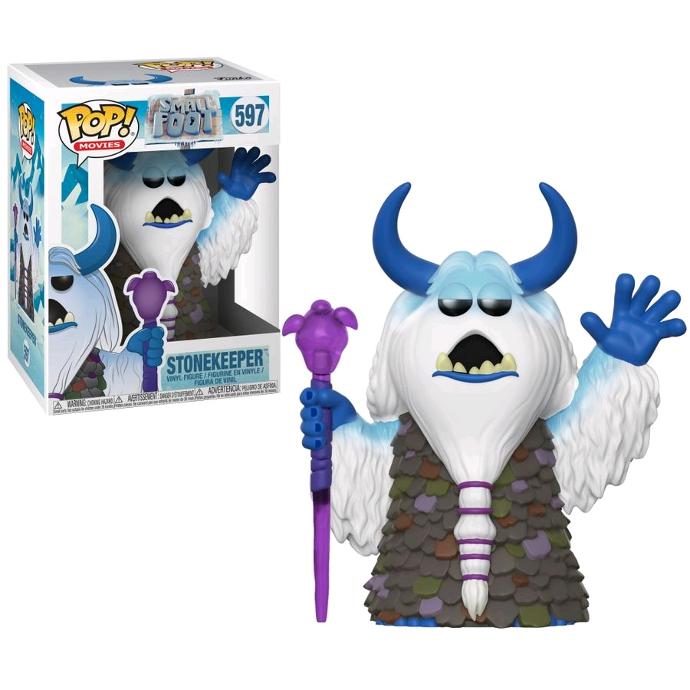 'Smallfoot' is a film about a Yeti named Migo, who is convinced that the elusive creatures known as "Smallfoot" (humans) really do exist. To celebrate its release, Funko have announced a new wave of Smallfoot Pop! Vinyl Figures!
This Pop! features Stonekeeper, one of the Yeti in the film. Now that the hilarious third season of Rick and Morty has squanched the multiverse by storm, Funko have announced their schwiftiest wave of Rick and Morty Pop! Vinyl Figures yet!
For those poor Noob Noobs who may be unaware, Rick and Morty follows the adventures of an alcoholic genius scientist and his grandson’s dangerous missions throughout the multiverse, resulting in one of the most hilarious television series in recent history.
This Pop! features Summer in her Warrior outfit from the hilarious Season Three episode 'Rickmancing the Stone'. 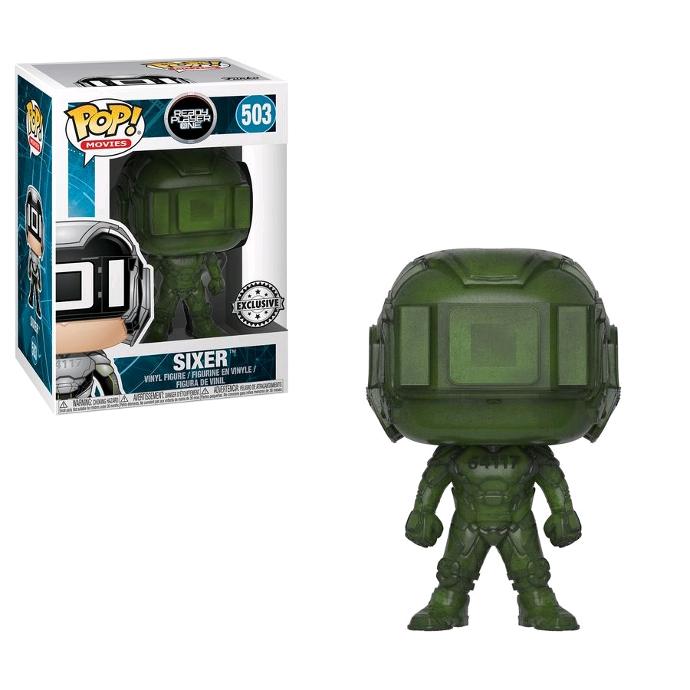 From filmmaker Steven Spielberg comes the science fiction action adventure “Ready Player One,” based on Ernest Cline’s bestseller of the same name. Now Funko has plucked some key players out of the upcoming film adaptation and given them the full Pop! Vinyl makeover. t's time to pull out the spandex and get ready to rumble because Funko's new line of GLOW Pop! Vinyl Figures are here, featuring stars from the hit Netflix series!
Set in Los Angeles in 1985, Ruth Wilder, a struggling actress, auditions along with dozens of other women in a fledgling professional wrestling promotion called the Gorgeous Ladies of Wrestling (GLOW). She is at odds with GLOW's director Sam Sylvia due to her tendency to overact. When Ruth's former best friend, retired soap opera actress Debbie Eagan, arrives at the ring, their confrontation promises to either make or break the show.
This Pop! features Ruth, complete in her "Zoya the Destroya" outfit. EPL Football (Soccer) - Gary Cahill Chelsea Pop! Vinyl Figure
The 2017/18 Premier league season is well underway, and to celebrate, Funko have just announced a new wave of EPL Pop! Vinyl Figures!
Featuring players from three of the league's most popular teams; Liverpool, Chealsea and Manchester United, these Pops are sure to beloved by fans worldwide.
This Pop! features Gary Cahill of the Chelsea Football Club.Cahill won the UEFA Champions League and the FA Cup in his debut season at Chelsea, and went on to win the UEFA Europa League, League Cup and Premier League.
Add him to your Funko collection today! Straight from the Ancient comes Funko's new wave of Dota 2 Pop! Vinyl Figures!
Dota 2 is a free-to-play multiplayer online battle arena video game that's a stand-alone sequel to Defense of the Ancients (DotA), which was a community-created mod for Blizzard Entertainment's Warcraft III: Reign of Chaos and its expansion pack, The Frozen Throne. Dota 2 is played in matches between two teams of five players, with each team occupying and defending their own separate base on the map.
This Pop! features Mortred, the Phantom Assassin, is a melee agility hero fitting the role of hard carry. Mortred is best-known, and infamous for, her ability to inflict staggering damage with single strikes. The Space Marines in Doom are equipped with machine guns, a combat helmet and body armour. They are responsible for the security and defence at the UAC facilities on Mars.
Add this cool Marine American Hero Space Marine to your Video Game Pop collection today. The Space Marines in Doom are equipped with machine guns, a combat helmet and body armour. They are responsible for the security and defence at the UAC facilities on Mars. Your favourite characters from the hit tv series American Gods are now available as Funko Pop! Vinyl Figures!
In the series, Shadow Moon is released from prison and enters a world he doesn't understand, meeting the mysterious Mr. Wednesday. Left adrift by the recent death of his wife, Shadow is hired as Mr. Wednesday's assistant/bodyguard. He finds himself in a hidden world where magic is real, where the Old Gods fear irrelevance and the growing power of the New Gods, including Technology and Media. In a grand plan to combat the threat, Mr. Wednesday attempts to unite the Old Gods to defend their existence and rebuild the influence that they've lost, leaving Shadow struggling to accept this new world and his place in it.
This Pop! features Laura Moon, Shadow Moon's wife and a revenant. 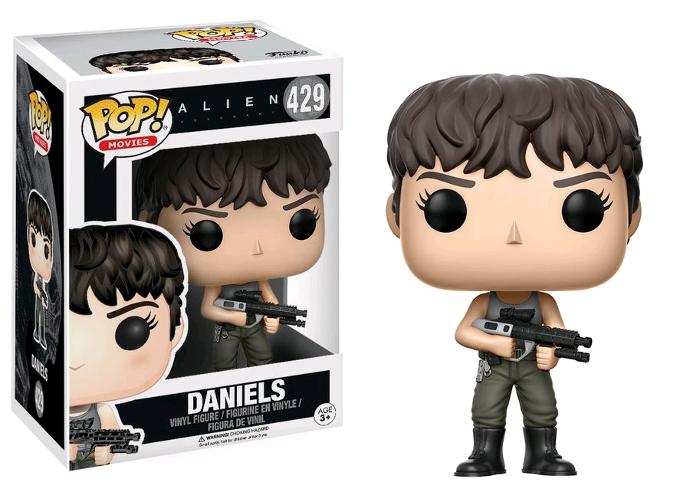 In space, no one can hear you scream, But here on Earth, everyone will hear you scream with joy…because Funko have just announced a wave of Alien: Covenant
Alien: Covenant is the upcoming sequel to the 2012’s Prometheus, which follows the story of the crew of the colony ship Covenant, which includes Walter, an android similar to David, a survivor of the doomed Prometheus expedition. They find what they believe to be an uncharted paradise, however it soon reveals itself to be a dark and dangerous world inhabited by the original David and monstrous creatures that are hunting them
Here we have the Daniels, a terraforming expert aboard the Covenant who is married to the ship's original captain, Jacob Branson. Trollhunters - Jim with Red Armor Pop! Vinyl Figure (2017 Fall Convention Exclusive)
It’s time for celebration once again as we present Funko’s wave of 2017 Fall Convention Exclusives! Be the envy of all your Funko-collecting friends by adding these to your Funko collection today!
Straight from beneath Arcadia come this adorable new Trollhunters Pop! Vinyl figure from Funko!
Trollerhunters is a Netflix animated series that follows the story of a secret civilisation of trolls that live beneath Arcadia, which humans are oblivious to.
This Pop! features Jim, the first human Trollhunter after he and his friend Toby find a mystical amulet which grants him the Trollhunter mantle. He comes complete with his red armour. Funko Summer Convention 2017 Exclusive SDCC17
Straight from Allsafe Cybersecurity comes this Mr Robot - Masked Elliot Alderson Pop! Vinyl Figure!
Here we have Elliot Alderson, a security engineer at Allsafe Cybersecurity and a vigilante hacker. He has social anxiety disorder and deals with clinical depression and delusions, which cause him to struggle socially and live isolated from other people. He’s featured wearing his mask as seen on the television show.
Add him to your Funko collection today! "We've had to survive without the Light all our lives."
Straight from The Last City come Series 2 of all your favourite characters from Activision's critically acclaimed shooter, Destiny, as they fight their way into Funko's Pop! Vinyl Universe!
Destiny follows the journey of the Guardians, the last defenders of humanity, set to protect Earth's last city from an alien threat, whilst also reviving their saviour the "Traveler", a white, spherical celestial body whose appearance centuries before had enabled humans to reach the stars.
This Pop! features Suraya Hawthorne, a human female sniper who left the Last City as a teenager to seek a new purpose. She comes complete with her hawk companion, Louis.
Add her to your Funko collection today! 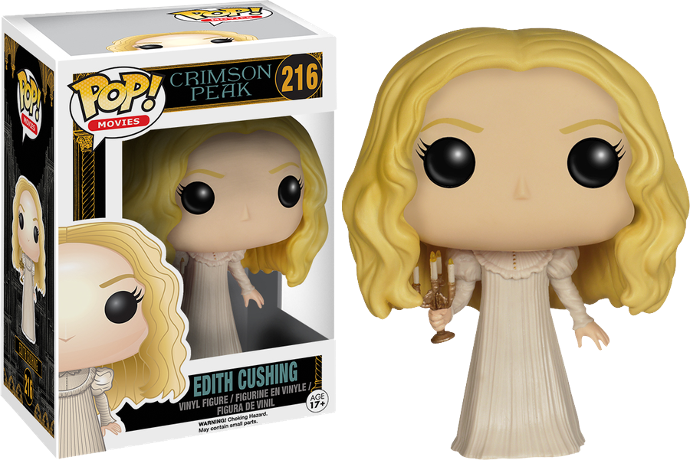 When her heart is stolen by a seductive stranger, a young woman is swept away to a house atop a mountain of blood-red clay: a place ﬁlled with secrets that will haunt her forever. Between desire and darkness, between mystery and madness, lies the truth behind Crimson Peak.
The latest film by Guillermo Del Toro, Crimson Peak pays homage to the grand dames of the haunted house genre, pulling influence from films such as Robert Wise’s the Haunting and Jack Clayton’s The Innocents. This film is set to be one of the most visually captivating horror films of recent years.
In preparation of the release of Crimson Peak, Funko have released this new line of Pop! Vinyl Figures, featuring characters from the film. Pick up the Edith Cushing Pop! Vinyl Figure for your collection today!